The Navratri Festival is, as the name suggests (“Navratri” in Sanskrit means nine nights), a ten-day Hindu festival during which, depending on the region, either the god Rama’s or the goddess Durga’s victory over an evil demon are celebrated every autumns.

Navratri falls on a different week each year as the exact date of the festival is determined by the Hindu lunar calendar. It also happens that the festival lasts one or more days longer or shorter, as also the movement of the sun and then moon in the sky, as well as the leap year are taken into consideration.

People from different parts of the country celebrate the Navratri Festival in different ways. Although they worship the same deities, they perform different rituals. In Hinduism, Goddess Durga, also known as Shakti, is the patron saint of the universe. She is one of the most popular deities of Hinduism, the protectress of all that is good and harmonious in the world. In depictions, sitting next to a Lion or a Tiger, Durga fights the evil forces of the world.

The Significance of Navratri for One’s Spiritual Path

The purpose of the celebration is for the well-being, peace and prosperity of all living beings on the planet. People pray for divine blessings so that everyone will gain wisdom and have the three Shaktis:

So why is Navratri important for one’s spiritual path?

Navratri is a celebration of the Shaktis. In addition to celebrating the festival, people are encouraged to gain deeper self-knowledge. During the festival, people celebrate, meditate and fast. According to people’s believe, there are six distortions of the mind. If one loses control over these, they would be an obstacle to spiritual development. During the nine days of the Feast of Navatri, by the grace of Shakti, the six distortions of the mind can be dissolved.

A Nine-day Fast during the Navratri Festival

Rich in colors, songs and celebration, teh Navratri Festival is also a period of relaxation, turning inwards and recharging with new energy. There are different customs in different parts of the country: some celebrate with feasts, others with fasting. But why is fasting good during this period? Fasting facilitates the inner path to happiness and joy. It reduces the restlessness of the mind and causes awareness and joy. Additionally it also has several health beenfits.

“We do not fast for the sake of divine powers, but to cleanse our bodies.” – Gurudev Sri Sri Ravi Shankar

According to Ayurveda, fasting revives the energies of our digestive system. (We have already written more about fasting here.) As a result of the increase in energy, toxins are removed, which renews all the cells in the body. Fasting is therefore an effective therapy for cleansing and renewing the body. As a result, the mind will become calmer and more peaceful because of the deep connection between body and mind.

During the Navratri Festival, everyone can spend time with themselves, meditate, and connect with the source of existence. However, fasting during these 9 days does not mean that no food should be taken with in. No flours and grains are allowed, but fresh fruit and other sattvic food are.

Last but not least, below you can see some impressions of the Navratri Festival celebrations in South India. 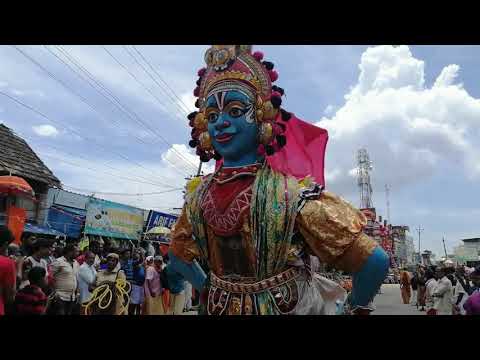